Apple music got a bunch of free press over the weekend, thanks to an open letter from pop superstar, Taylor Swift. The letter, titled, “ To Apple, Love Taylor,” detailed why Swift’s latest album, 1989, would be withheld from Apple’s new streaming service, set to debut June 30. Swift’s beef was that Apple expected artists to allow their music to appear on the free version of the streaming service, in exchange for no royalties whatsoever.
It didn’t take long before Apple’s top execs circled the wagons and raised the white flag: 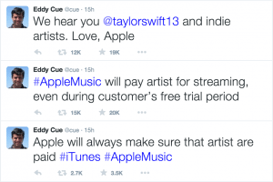 It seems like a fairytale David and Goliath story. But what really happened here?
Sure, Apple’s position was indefensible. They’ve got more cash than the U.S. government, and they were essentially asking artists to provide 3 months' work for free. And sure, Swift had nothing to lose. The press would undoubtedly run with the story. She’d either win and look great, or the story would drag on and she’d eventually win and look great. Is Swift’s Twitter account (59.3M followers) worth more than Apple’s bank account ($160B)?

You might think the real winner was social media, as many news outlets are saying today. Swift published the letter on Tumblr and then linked to it on Twitter, setting off a virtual explosion with just a few keystrokes. Doubtless it was a win-win for Swift to use the platforms she uses to grow her audience, and for Twitter to rake in the praises of seemingly every writer in the country. But perhaps Twitter’s stock prices are a better indicator. The markets seem to say that Twitter was mostly unaffected.

Maybe all of us won. Swift surely could have settled this matter in private negotiations with Apple. But to what end? We probably wouldn’t be talking about it as much…
Whereas Jay Z and his friends took a hit for trying to undercut the major players in the music streaming space with Tidal, Swift reached across the aisle with much better results. She seems to have both recognized the landscape for what it is, while doing what she could to include the tech behemoth in a potential solution, rather than ostracizing or alienating the good people at Apple.
The best thing the music industry could do now is to take its cues from Apple. It’s clear that a solution won’t come about if both sides at war over streaming continue to shut one another out.

Music labels (and artists) will have to wholly embrace streaming, and platforms will have to be inclusive, and not exclusive, in order for streaming to do anything other than race to $0/month.
If that happens, we’ll all keep winning. And bonus – maybe the artists will end up getting paid, too.