You heard me – er, Wharton – right... "Men buy, women shop." According to a paper published at UPenn's B-school, the sexes have different priorities when walking down the aisles. Whereas men see shopping as a mission – get in, purchase, get out – women view it as a social endeavor, often bringing along friends and researching or trying on new products together. According to Wharton marketing professor Stephen J. Hoch, shopping behavior mirrors gender differences throughout many aspects of life. “Women think of shopping in an inter-personal, human fashion and men treat it as more instrumental. It’s a job to get done.”

But you knew that, right? I mean, it makes perfect sense.

Thing is — it's true even for eCommerce. Take Birchbox, for example. (Birchbox is an eCommerce subscription beauty service that started selling men's products about 3 years ago.) Their eCommerce platform started tagging orders as fraudulent at one point, when they were seeing virtual shopping carts with 6 or more of the same item being purchased. Turns out, that's just how men were using their service. Male shoppers would find a soap or shampoo they liked, and then buy enough for the next six months.

And you might say, "Sure, but how much do men actually buy online?" The truth is staggering — when it comes to eCommerce, men drive nearly as much overall spending online in the U.S. as women. Even as far back as 2012, men accounted for nearly half of all eCommerce spending. Nowadays, men are more likely than women to make purchases on mobile devices (22% of men made a purchase on their smartphones last year, compared to 18% of women). Moreover, many men say they would like to shift all their spending online (40% of American men aged 18-34 say they'd "ideally buy everything online," compared to 33% of women the same age). 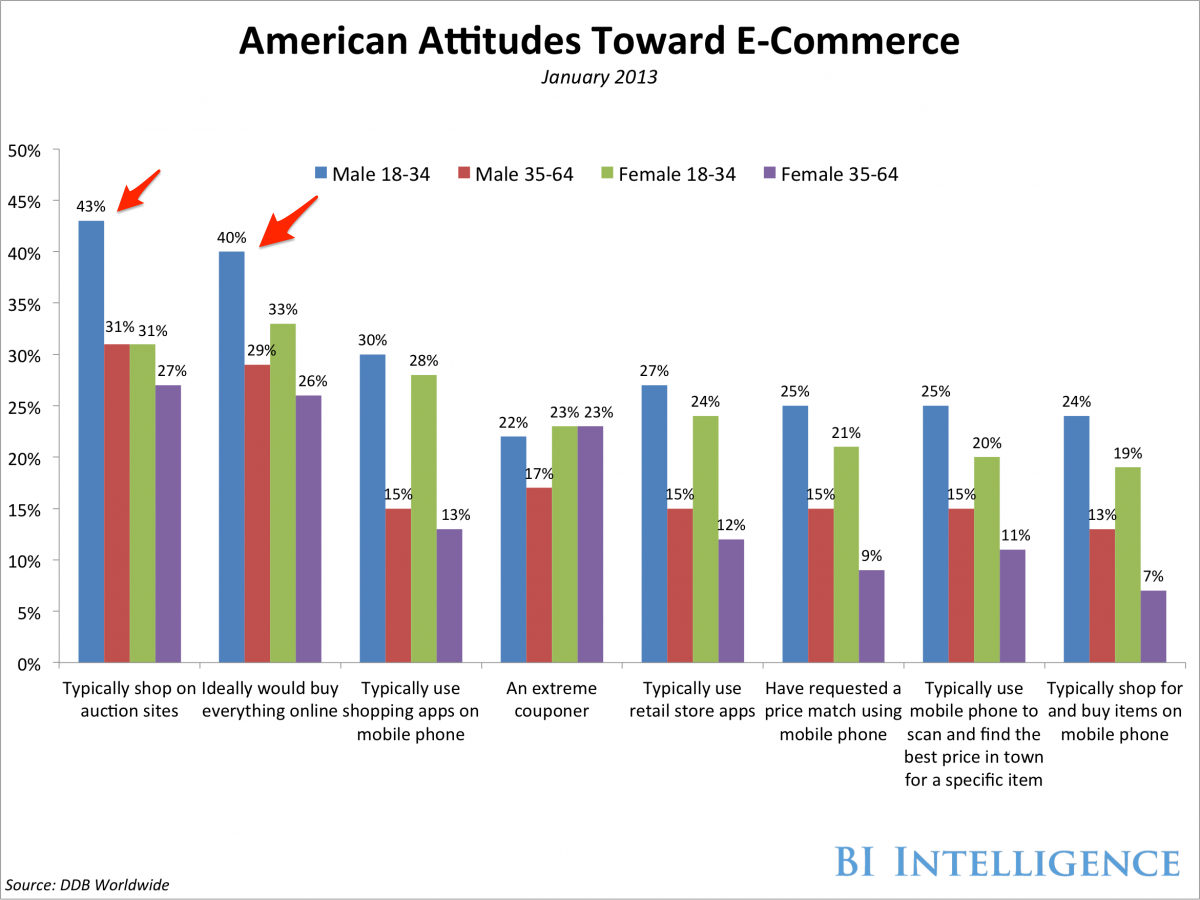 Even when they're not buying online, though, men use their smartphones for research more than women. According to Business Insider, men of all age groups are more likely to look for lower prices on their phones than women.

These trends are likely to intensify, too. Research shows that among teens, the proportion of boys who shop online is ten percentage points higher than that for teen girls (86% for boys, compared to 76% for girls). What's worth keeping an eye on, too, is what kind of sites the male shoppers favor — it seems right now that most men (of all ages) are doing most of their shopping on sites and apps where they can name their price. Auction sites like eBay and Tophatter are winning the day with the largest contingent of shoppers online right now.