With the recent passing of the great B.B. King, many memories of his influence throughout the industry and even on my own personal journey learning to play guitar come to mind. I first picked up a guitar when I was 13 years old. Quite honestly, it was because we were required to have an “Arts” credit. I was about to sign up for Visual Studies until my dad suggested that I pick guitar so we could “jam” together. I had no idea what that meant at the time, but the concept of the “jam” has forever changed my life.

From his humble beginnings as a plantation worker born to sharecroppers to one of the greatest guitarists ever, B.B. King jammed with hundreds of artists from Cyndi Lauper to U2, from Clapton to Etta James, from Sheryl Crow to yes, even President Barack Obama… and the list goes on.   He had a wonderful way with people and was quick to collaborate and perform with many of the most important artists of our time. I still remember a great tune called “Playing with My Friends” where he performs with another one of my favorite blues guitarists Robert Cray. It was so clear that the two guitar giants had a blast playing together and were able to skip down a path without getting in each other’s way. Check it out here.

It is quite an extraordinary thing when two or more people get together to jam. The music itself becomes the medium of communication. In that sense, B.B. was a masterful communicator. Often times there is an improvisational element where the participants simply make things up as they go along – perhaps the true definition of “playing.” One participant often lays down the chords (the rhythm guitar) while the other improvises or solos (the lead guitar).

Most early lead guitarists learn the pentatonic scale. A series of 5 notes (hence the prefix “penta”) that has existed in western music since the days of Gregorian Chant. Add the flatted 5th of the scale and you’ve got the blues scale. BB King and his beautiful Gibson guitar Lucille (who was almost as famous as BB himself – check out the story about her through this song) was a master at this scale. His playing worked to tell a story with high sweet staccato bends and generous use of open space with perfectly phrased solos. His virtuosity would always stand out from the crowd as uniquely BB’s. It is no surprise that he is ranked #6 on Rolling Stones’ list of Top 100 Greatest Guitar Players and influenced many of the greatest guitarists of all time including Eric Clapton, Jeff Beck, and Jimi Hendrix to name a few.

B.B. will be buried next week in Indianola, Mississippi, a small town in the Delta about 20 miles away from where he was born. While he was a 15-time Grammy winner and a member of the Rock and Roll Hall of Fame, he will be remembered not only for his accomplishments on the stage and in the studio, but also for his dedicated work giving back to the community.

His philanthropic work was something that affected me personally. BB was involved in a non-profit where I was a teacher and early board member called Little Kids Rock. Little Kids Rock helps to teach contemporary music and provide instruments to kids in disadvantaged neighborhoods. I still remember the day when the Executive Director and good friend Dave Wish called me with the opener, “You’ll NEVER believe what just happened!” “Uh, what?” I asked. “B.B. just joined our board!!!” B.B. was one of our first Honorary Board Members along with another late blues great John Lee Hooker. I never had a chance to meet B.B., but I hear he was an incredibly charming and wonderful man.

His music, influence, and personality profoundly impacted the world. The King will live forever in our hearts and in our minds. Certainly in mine… 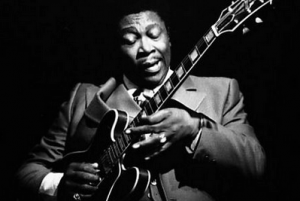