The growing wearables market has coincided with a major increase in the Health & Fitness app category; both hardware and software companies are engaged in a high-stakes race to dominate the digital fitness space. With so many players vying for market share, some brands are thriving (Peloton, Aaptiv) while others have disappeared altogether (Jawbone, Pebble). The primary difference between winners and losers in digital fitness? Customer experience.

At Feed.fm, we provide integrated music content for many of the companies working in this space, including Fitbit, DailyBurn, and others. We’ve seen loads of fitness coaching apps that feature great instructors, thoughtful programs, and elegant user design. To succeed in today’s saturated digital fitness market, brands must differentiate themselves in other ways that deliver an exceptional customer experience.

A Brief History of Portable Music

In just half a century the inconceivable has become a reality. Technology has advanced to the point where we can carry virtually all the music that’s ever been recorded in our pocket.

In a world of unlimited, on-the-go access, it’s a given that most consumers want to listen to inspiring music when exercising. From the highly efficient iPod Shuffle to newer gadgets, the online journal Verywell spotlights 9 of the best music players for exercisers. And if you’re a tech geek/runner, TechRadar’s first pick for best wearables of CES 2018 may be up your alley: the Garmin Forerunner 645 Music.

Virtual reality companies are also entering the digital fitness space. Is the idea of working out less appealing than playing your favorite video game? No problem. VirZOOM has created a virtual reality bike with game controllers built into the hands and headset, allowing you to physically power your choice of racecar, battle tank, or flying Pegasus. Even gamers need a good soundtrack to motivate their best performance, and VirZOOM users can choose between Feed.fm-curated playlists of High Energy Pop, Classic Pop, and EDM while exercising.

From VR to wearables to older-school portable music devices, there are an incredible variety of options for pairing fitness and music. If you’re working in the digital fitness space and don’t currently provide music to your users, perhaps music integration should be one of your company’s New Year’s resolutions. For the rest of us, there’s still time to make or honor the personal resolution to exercise more regularly.

Whether you choose to go simple 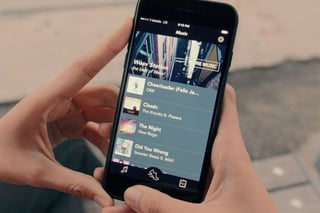 it’s never been easier to take your favorite fitness program and music with you anywhere.