Funeral’s opening song reflects on childhood, growing up, and connecting with a friend. More broadly, I think this longing for connection can be seen as the need for community, an idea that plays a big part of Arcade Fire’s live shows (the band frequently breaks “the fourth wall” and enters the audience) and is expressed in many of their lyrics. The subtitle Tunnels can be understood as connecting an individual and the neighborhood/larger world.

The music does the heavy lifting to convey these feelings, moving from fragile and disjointed beginnings into a lush, bright bloom of optimism, as a melodic climax takes flight. The pairing of fantastical, almost naive lyrics with the song’s arc reminds me of the children’s book Where the Wild Things Are, complete with the wild rumpus.

Neighborhood #3 (Power Out) from Funeral

Neighborhood #3 (Power Out)’s lyrical pattern and content echo Neighborhood #1, but this time the coin has landed on tails and things are bleaker. Arcade Fire conjures a dark landscape that builds to an ambiguously positive last verse. While this song has inventive instrumental flourishes and musical layers, it’s one of Arcade Fire’s most straightforward rockers.

Wake Up from Funeral

Arcade Fire’s most famous song became a surprise hit that’s been used for major sporting events, films, and television. In retrospect it’s easy to see why: Wake Up is a massive sing-along anthem. One reason for its uplifting quality is lyrics that address the unavoidable truth of growing up while celebrating the child in each of us. The other is the music itself, with Wake Up structured as two distinct parts. A majestic rallying cry is followed by an uptempo 1950s-era rockabilly dance, as Arcade Fire throws a party for the child we all have to leave behind.

Pairing some of Funeral’s saddest lyrics with its catchiest music, Haiti provides an ideal spotlight for Arcade Fire’s not-so-secret weapon Regine Chassagne and her distinctive voice. As multi-instrumentalist, singer, and songwriter, Regine wrote this song about the homeland her parents and other political refugees fled in the 1960s.

Rebellion (Lies) shares many similarities with the songs above: youthful idealism vs. adult resignation; a thick, layered, symphonic sound; repurposed disco beat; and the gradual, dramatic build to a cathartic sing-along. Somewhat amazingly, Arcade Fire has the songwriting chops to deliver another signature song cut from the same cloth. Both studio and live versions of Rebellion (Lies) show a band in terrific command of pacing, working the minimalist groove into a controlled frenzy.

From the unexpected blast of pipe organ that launches this song to the reverberations of its final chord, Intervention takes us to church, or at least Arcade Fire’s version of it. Appropriately, the impassioned lyrics address religion plus war and family, all themes that were particularly timely post-9/11 at the beginning of the Iraq War.

Ocean of Noise from Neon Bible

Arcade Fire is less known for its ballads but those few they’ve written are pretty incredible. Ocean of Noise is the best. We get a stripped down sound that focuses attention on Win's melody and eventually the band countermelody. The cryptic lyrics and plaintive vocals seem to suggest a doomed romance, and the song channels an appropriate moth-to-a-flame quality.

Arcade Fire’s twist on a folk song, Windowsill takes a selective inventory of American society: television, advertising, global warming, the economy, and war. And promptly rejects it, with the repeated mantra “don’t want to see it at my windowsill.” While the contrarian spirit of this song isn’t groundbreaking, its journey from solo acoustic guitar to the richly orchestrated, emphatic conclusion is stirring.

No Cars Go from Neon Bible

A runaway freight train of a song, No Cars Go is a distillation of Arcade Fire to its essence. Wonderfully childlike, evocative, and occasionally shouted or wordless lyrics are elevated by a highly imaginative, unconventional assortment of instruments.

With this album’s title track, Arcade Fire turns to an unusual songwriting approach they’ve honed through the years: referencing older musical styles to deepen the lyrical impact. The Suburbs is their most complete realization of the technique, as it sounds simultaneously like American popular music of the late 1950s and 1960s and classic Arcade Fire. Casting the entire song in this throwback style reinforces the band’s conflicted feelings and hazy memories about growing up in the suburbs that dominated their childhoods.

We Used to Wait from The Suburbs

One of Arcade Fire’s most nostalgic songs finds the band reflecting on more innocent, simpler times, using the metaphor of love letters sent via mail. Highlights of We Used to Wait: the delay and buildup before the sweetly melodic chorus finally arrives, and how the band stretches the song for a minute-long coda beyond its expected conclusion.

Sprawl II (Mountains Beyond Mountains) from The Suburbs

The shimmering highlight of their third album features Regine in her strongest vocal performance. Synthesizers and electronic effects swirl around a midtempo groove as she commands “I need the darkness, someone please cut the lights,” and dances off the doldrums of suburban sprawl.

Is this a party song masquerading as spiritual truth or vice-versa? Your guess is as good as mine, but with music this infectious it doesn’t really matter. Beginning with a hyperactive carnival beat, Here Comes the Night Time clearly shows the Haitian influence Arcade Fire attributed to this album. Just moments after beginning, the song screeches to a much slower tempo for the verses and chorus, and this is only the first such surprise. The musical yin/yang of Here Comes the Night Time packs a wallop.

Awful Sound (Oh Eurydice) is a new twist on the classic myth of Orpheus, the Greek God of music, which has inspired many great works of art throughout history. It’s a bit of a gutsy move, but Arcade Fire deliver one of their loveliest melodies and a fresh take on the story. James Murphy of LCD Soundsystem helped produce Reflektor, and his studio wizardry underscores the song’s drama.

Classic minimalism is reimagined as pop song for this cinematic conclusion to Arcade Fire’s double album. Supersymmetry is a special trip and I’ll leave you to your own experience...

Hopefully these reflections on Arcade Fire at 15 have added some kindling to the bright blaze their music has sparked around the world. And, perhaps you too may experience your own moment of transcendence when you push play. 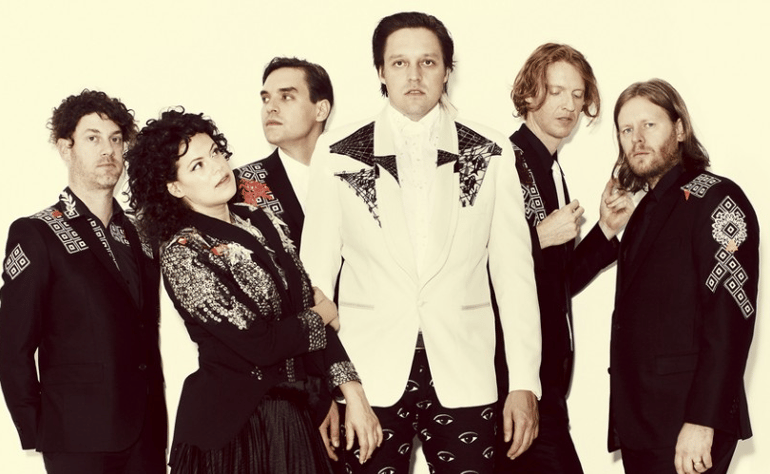